October 7-28, 2012: SpaceX’s Dragon spacecraft has successfully completed a resupply mission to the International Space Station (ISS).  The mission, called CRS-1, is the first of twelve cargo missions Dragon will fly as part of the Commercial Resupply Services (CRS) contract with NASA. As such, the mission marks the return of the regular ability of the United States to deliver cargo to the ISS, and it is the second commercial flight to do so (the first being the Dragon Demo mission to ISS). 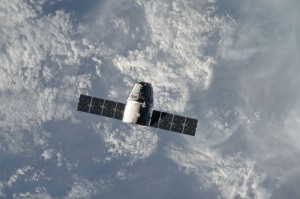 Dragon was launched from Cape Canaveral on a Falcon-9 rocket on October 7, 2012, then reached ISS and was berthed to the U.S. Segment Node-2 by the on-board crew at 14:03 GMT on October 10. After three weeks attached to the ISS, Dragon safely departed, re-entered the atmosphere, and was recovered on October 28, 2012. Odyssey engineers performed real-time mission support at Mission Control Center in Houston, working with both SpaceX and NASA during the entire mission. Odyssey’s role in Dragon development was extensive, including Dragon Guidance Navigation and Control (GN&C) and System Engineering design support, as well as Independent Verification and Validation of all safety critical software. Congratulations to the entire SpaceX and NASA team! For more images and details about the historic SpaceX Dragon CRS-1 mission, visit the SpaceX website: http://www.spacex.com